As a supplier to the automotive industry, the BLANK-Group casts a large proportion of the investment castings for this industry with nickel-based alloys using the vacuum casting process. In order to improve quality and increase the output quantity, the existing single-chamber plant has now been revised and expanded with an innovative concept.

"The previous single-chamber vacuum casting plants and the associated technology are working efficiently, however, the sequence of process steps approaches the limits of feasibility," explains Mr. Debek who supervised the installation of the plant. In the existing process, the shells, which have a temperature of over 1000 °C, are removed manually from the circular furnace and placed in the single-chamber plant. In the next step, employees place a fibre crucible with the still solid alloy on the shell. Between the shell and the crucible a coin sized "penny" ensures that the melt in the subsequent casting process is uniformly liquefied under vacuum in the chamber before the melting of the "penny" clears the way into the shell. The problem with the previous process, however, is that the shell already cools uncontrollably during the time it takes for the melt to liquefy which can lead to faults with demanding investment castings.

The installation of an additional two-chamber plant has now eliminated this problem. The plant, which consists of two chambers, melts the alloy in an upper chamber via an induction coil while the shell is still in the circular furnace without losing heat. Only when the melt is ready for casting the plant signals its readiness  to receive the shell. By means of an industrial robot the shell is fed to the lower chamber within a few seconds and then the air is quickly pumped out to connect both chamber areas after vacuum equalisation. The shell is then moved to the pouring position and the cast is made by turning the crucible. With the help of this new process the shell cooling time could be reduced by more than a half.

"Using the new plant, we have the possibility to produce difficult to cast, thin-walled parts with process reliability, because the cooling phase is reduced by two minutes which prevents casting errors. Investment castings, on which the cooling of the shell has less influence, are still cast on the existing single-chamber system," explains Peter Schäfer who is responsible for the casting area, "Now we wanted to go one step further and connect both plants, i.e. the single- and the two-chamber casting plant, to further automate the process."

"This connection was made by a robot that operates both systems simultaneously," adds Robert Rettich, head of operational management and automation at BLANK, "The challenge here was particularly in the different timing of the plants. However, we were able to coordinate the machines and the robot in such a way that the shell handling and the placement of the ingot in the single-chamber system is handled by the robot. The insertion of the shell with the ingot into the plant is also automated by the robot and a lifting unit." This robot of the single-chamber plant also operates the filling of the new two-chamber plant. "This made it possible to achieve a fully automated operation of the machines."

The coordination and movement of the shells by the robot is only possible through a sophisticated gripping system that was developed in-house by several project teams. So it was possible to achieve that the ceramic moulds with different structure types are handled by only one robot gripper which fulfils the process requirements of both the single-chamber and the two-chamber plant.

The concept is to be extended to other plants in the company in the next step, explains Peter Schäfer. "Through full automation and the integration of the new two-chamber plant we achieve a faster through-put time and better quality results for parts that are demanding for the casting process. In order to use the connected systems it is necessary to adjust the composition of the clusters to each other. This adjustment is now to be carried out on further models, so that in the future more and more investment castings can be produced in series using the new concept. That is our next challenge!" 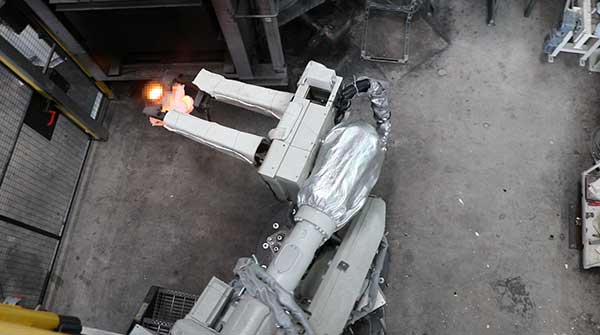 A robot handles the shells in the two-chamber vacuum casting plant.

A robot handles the shells in the two-chamber vacuum casting plant. 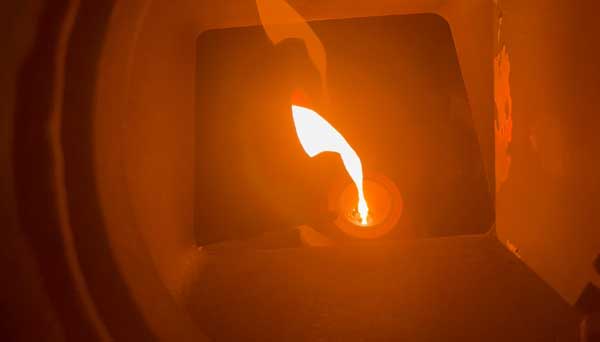 The casting in the two-chamber vacuum casting plant.

The casting in the two-chamber vacuum casting plant.