Hybrid concepts are the current trend like for example hybrid work, hybrid vehicles or hybrid trade fairs. The core definition is always the same: a mixture of several forms of work, drive or events to achieve an increase in efficiency. The development department at BLANK is constantly looking at optimization potentials in the investment casting process. In doing so, the BLANK hybrid casting process was developed, based on the same core definition: the symbiosis of two different manufacturing methods in order to become faster and more precise, depending on the application. "Our approach becomes understandable if you first look at the regular manufacturing process," explains Rainer Bühler, Head of Business Development at BLANK.

At the beginning, a tool is needed which is used to produce the wax parts. The wax parts are almost identical to the later casting part regarding the dimensions. Slight deviations are due to different shrinkages of industrial wax and the metal alloy used. The wax parts are then glued together to form trees, which means that from now on several individual parts can be produced in a single manufacturing step. The casting shell is then formed by dipping the wax trees in ceramic mass and then sprinkling them with sands of different grain sizes. After drying, the wax is evaporated and the shell, formed this way, is burnt at over 1000 °C. This is followed by the casting of the hot metal: the investment casting. When the shell has cooled down completely, it is knocked off and the parts are separated from the casting tree, cleaned and further processed.

"The idea of BLANK hybrid casting is now to replace the production of the wax part using an injection mold with wax 3D printing," says Bühler, "On the one hand, this shortens the production time considerably, on the other hand, also part geometries can be realized that were previously impossible or very difficult to produce using investment casting."

This can be seen, for example, in the production of acetabular cups. The casting part consists of a solid shell-shaped head, on the surface of which are hundreds of small so-called tripods. These fine, cross-shaped anchors are the link between the implant and the bone. Initially, the tripods were glued to the cup by hand in the wax part, which was extremely time-consuming and very filigree manual work, making each implant a unique piece. Within the project implementation a realization in wax 3D printing could be achieved thanks to the BLANK hybrid casting, allowing a positioning of the tripods accurate to a tenth of a millimeter. Impossible by hand! This ensures a more secure mechanical connection between the tripods and the femoral head, procures continuity to the process and enables a reduction in throughput and personnel costs.

Another application example can be found in racing. In this sector, weight reduction plays a decisive role in order to be faster and more agile. As part of a manufacturing cooperation, a bionic wheel carrier construction was developed which, despite considerable weight saving, can withstand the required loads of the end application. Compared to the original milled part, over 40 percent of the weight was saved. This bionic part construction can only be produced in this form using BLANK hybrid casting.

The explained reduction in production time through 3D printing pays off especially for prototypes or small series. "Depending on customer requirements, the investment casting process consists of 20 to 60 individual operations. This may involve a high throughput time and sacrifice flexibility. Here hybrid casting can be an interesting alternative to the regular manufacturing process, especially for small batches or spare parts procurement," says Bühler. For a fully comprehensive smart concept, an online 3D printing calculator has also been integrated on FEINGUSS BLANK's homepage. "This accelerates the ordering process for our customers and even enables production of investment castings within just 23 working days."

BLANK hybrid casting from Riedlingen - an efficient solution for your casting part!

BLANK hybrid casting in the manufacture of acetabular cups

BLANK hybrid casting in the manufacture of acetabular cups 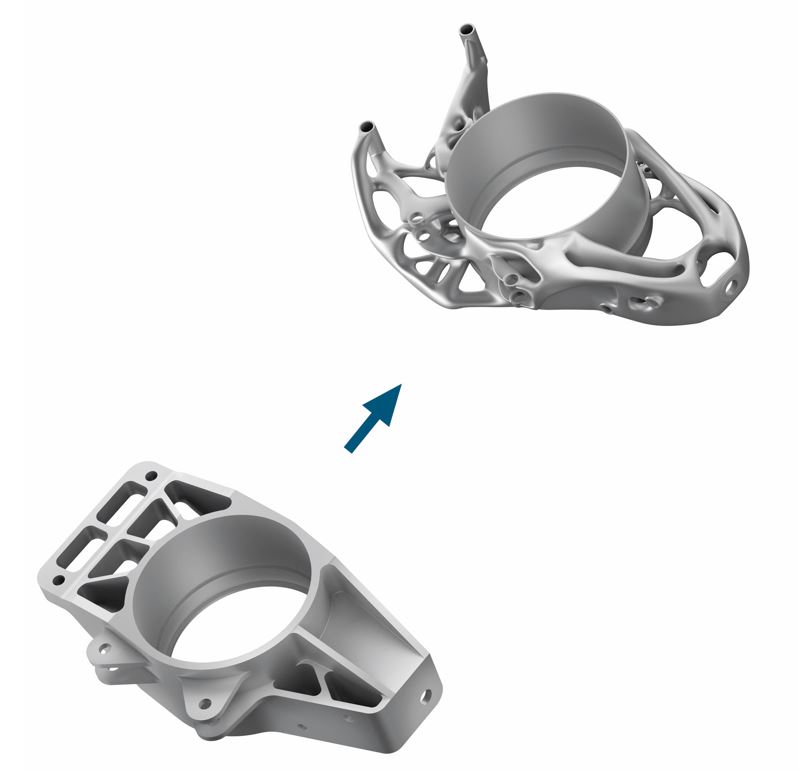